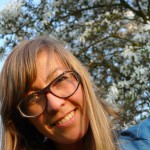 Julie Sass (b.1971) studied visual art at the Danish Royal Art Academy in Copenhagen and at New York University in New York City (MFA), where she specialized in painting (2000). Later she received her MA (Cand. Phil.) in Theory & Mediation from The Royal Danish Art Academy in Copenhagen (2006). She is represented at the galleries Pierogi Gallery pierogi2000.com and  Gallery Lars Olsen + Thomas Wallner: gallerilarsolsen.com . Sass has worked for Yoko Ono and Gilbert and Lila Silverman’s Fluxus collection as an assistant to Jon Hendricks, New York. Lately she has started the ongoing exhibition project called LOKAL (Local, with Tomas Lagermand Lundme), where they focus on how contemporary art can interact (locally) in the urban environment, creating new spaces of meaning and understanding. Her art-work has been included in several collections, private and public.